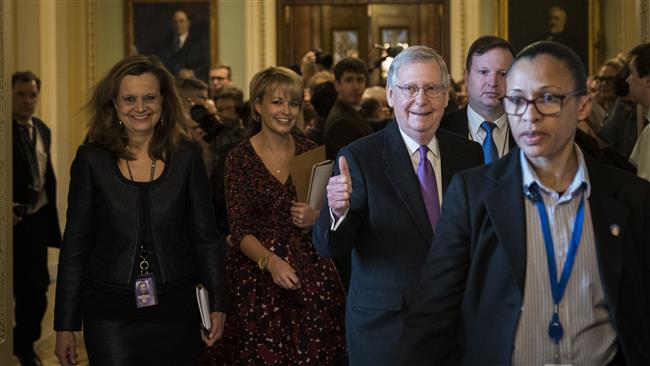 US: Democrats say their senators caved on shutdown 0

Democrats, including House Minority Leader Nancy Pelosi, are in disarray over their party’s agreement with Senate Republicans to temporarily fund the US government.

Pelosi spoke out against the deal on Monday, saying there was no reason to support it in the House.

“I don’t see that there’s any reason — I’m speaking personally and hearing from my members — to support what was put forth,” Pelosi said at a press briefing.

Democratic Senators with 2020 presidential aspirations also came out against the agreement.

“The majority leader’s comments last night fell far short of the ironclad guarantee I needed to support a stopgap spending bill,” said Senator Kamala Harris. “I refuse to put the lives of nearly 700,000 young people in the hands of someone who has repeatedly gone back on his word. I will do everything in my power to continue to protect Dreamers from deportation.”

Activists took an even harsher tone against the Democrat’s compromise with Senate Republicans.

“Today’s cave by Senate Democrats — led by weak-kneed, right-of-center Democrats — is why people don’t believe the Democratic Party stands for anything,” said Stephanie Taylor, co-founder of the Progressive Change Campaign Committee. “These weak Democrats hurt the party brand for everyone and make it harder to elect Democrats everywhere in 2018.”

Senate Democrats bowed to pressure to reopen the government Monday, joining Republicans in an 81-18 vote on Monday to fund the government through February 8.

Senate Democrats agreed with Republicans to end the government shutdown, after they received a promise from after Senate Majority Leader Mitch McConnell to move on immigration bills including support for undocumented immigrants brought to America as children.

“After several discussions, offers and counteroffers, the Republican leader and I have come to an arrangement. We will vote today to reopen the government to continue negotiating a global agreement,” Senate minority leader Charles Schumer, Democrat of New York, said ahead of the vote.

he added that the agreement includes no guarantees for a bill to pass — nor does it tie an immigration bill to a must-pass measure to give Democrats leverage.

The agreement also includes no guarantees that a potential Senate agreement on DACA could see a vote in the House.

The short-term funding bill still needs to pass on a final up-or-down vote, but that is a formality now. The House of Representatives is expected to approve the resolution soon.

The government shutdown, first in five years, went into effect shortly after Friday midnight, when Senate Republicans and Democrats failed to reach an agreement on the stopgap funding measure to continue government services.

The shutdown followed Congress failure to reach a deal on the status of “Dreamers.”

Dreamers are hundreds of thousands of undocumented migrants brought into America as children, who were protected from deportation until September 2017, when the Trump administration ended the Deferred Action for Childhood Arrivals (DACA), created by former US President Barack Obama.

Trump said last year that he was ending the DACA program, and gave Congress until March to deliver a legislative fix.

Faced with criticism over the decision, Trump made it clear that he would only accept a DACA deal if Democrats agreed to include funding for his controversial wall on the border with Mexico in the 2018 budget.