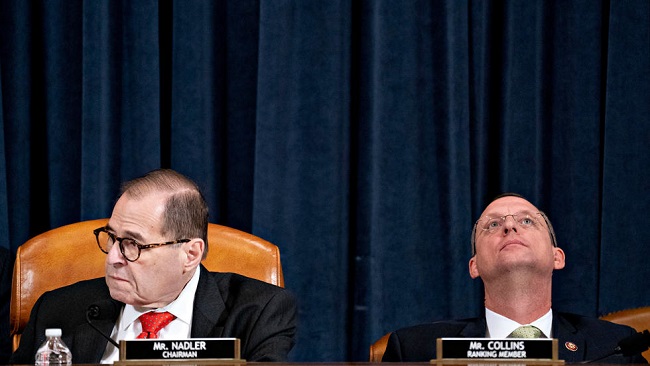 US: Lawmakers clash over impeachment charges against President Trump 0

US lawmakers clashed Thursday ahead of a committee vote to approve charges of presidential abuse of power and obstruction of Congress, a fateful step toward the impeachment of Donald Trump.

The House Judiciary Committee began a second day of historic debate with the parties holding diametrically opposed views on the move to oust the president from office for misconduct.

If, as predicted, the full House votes next week against Trump, he will become only the third US commander in chief ever to be impeached and placed on trial in the Senate.

The president stands accused of leveraging critical military aide to Ukraine and a White House meeting to pressure Kiev to open an investigation into Trump’s political rival Joe Biden and his son Hunter Biden, and a debunked theory that Ukraine interfered in the 2016 presidential election to help Democrats.

Wednesday saw hours of impassioned debate, including an appeal to Republicans by the committee’s Democratic chairman, Jerry Nadler, not to “justify behavior that we know in our heart is wrong.”

Lawmakers were to focus on the procedural nitty gritty of amending the articles of impeachment on Thursday, but rancorous clashes punctuated the session.

“The president committed the highest crime against the constitution by abusing his office,” Democratic congressman Eric Swalwell said.

“Cheating in an election,” he went on. “Inviting foreign interference for a purely personal gain while jeopardizing our national security and the integrity of our elections.”

The outcome in the House Judiciary Committee is essentially a fait accompli, with the majority-Democratic panel expected to reject all Republican efforts to change the articles and approve the charges, sending them to the entire House of Representatives for passage next week.

House Speaker Nancy Pelosi, who announced the impeachment inquiry in September, would not identify a specific day next week for an impeachment vote.

When pressed, she also dismissed concerns that a handful of moderate House Democrats, including some representing districts that voted for Trump, would likely defect and oppose impeachment.

“People will vote the way they vote,” Pelosi said.

Republicans repeatedly asserted that the president has committed no crime, and they quickly moved to dismiss the first charge in the nine-page resolution, abuse of power.

“Article one ignores the truth,” Republican Jim Jordan declared. “Those are not the facts.”

The White House has refused to participate in the House inquiry, ordering key figures swept up in the Ukraine saga not to testify, including Secretary of State Mike Pompeo and acting White House chief of staff Mick Mulvaney.

Trump himself has lashed out online repeatedly at his Democratic rivals in recent days.

On Thursday, he retweeted dozens of people who have rushed to his defense, including his personal attorney Rudy Giuliani, who stands accused of orchestrating a pressure campaign against Ukraine outside of regular diplomatic channels.

Most indications are that the Republican majority in the Senate will ultimately protect Trump from conviction and removal.

But impeachment would mar his record as president and could affect his reelection chances in November 2020.

At a political rally in Hershey, Pennsylvania on Tuesday, he ridiculed the charges.

“Everybody said, this is impeachment light,” Trump said, adding “there are no crimes” and Democrats are just trying to win the next election.

As the back-and-forth began in committee, the panel’s top Republican Doug Collins branded the proceedings a “farce of substance,” and seized on Nadler’s legalistic effort to tweak the resolution so that the names Donald J. Trump and Donald John Trump would be the same.

Seeking that change “simply shows the, frankly, absurdity of where we’re at,” Collins said.