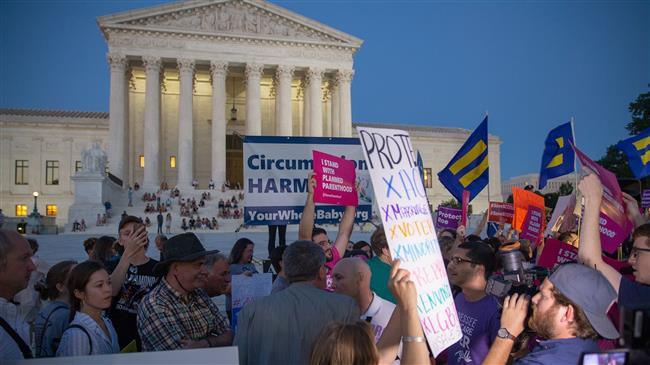 US President Donald Trump has nominated Judge Brett Kavanaugh for the US Supreme Court, provoking angry protests in Washington and elsewhere.

“It is my honor and privilege to announce that I will nominate Judge Brett Kavanaugh to the United States Supreme Court,” Trump said at the White House on Monday.

Kavanaugh’s nomination set the stage for a bruising confirmation battle in the Senate, where Trump’s fellow Republicans hold a slim majority.

If confirmed, the 53-year-old judge will replace long-serving Justice Anthony Kennedy, who announced his retirement on June 27th.

This is the second time Trump nominates a judge for the US Supreme Court. Last April, Trump’s pick for the post, Neil Gorsuch, garnered the Senate’s support after heated debates.

Trump described Kavanaugh as “one of the finest and sharpest legal minds of our time,” saying he is “considered a judge’s judge and a true thought leader among his peers.”

Kavanaugh, who is a Conservative federal appeals court judge, underlined the need for a judge to be independent.

Shortly after the announcement, protesters decrying Trump’s nomination blocked traffic outside of Trump Tower in New York City, leading to the arrest of seven people, according to law enforcement sources.

In Washington DC, people took to the streets to show their opposition to Trump’s pick, chanting, “Hey Hey, Ho Ho, Kavanaugh has got to go.”

Among protesters were US Sens. M Kirsten Gillibrand (D-NY), Cory Booker (D-NJ) and Bernie Sanders (I-Vt) who led a demonstration against Kavanaugh’s nomination on the steps of the Supreme Court in Washington.

“Are you ready for a fight? Are you ready to defend Roe vs. Wade?” Sanders said. “This is a tough fight but it is a fight that we can win . . . We have the American people on our side, now we have to go state by state by state to make sure senators do what their constituents want.”

“It’s a huge moment for our country,” said protester Kevin Camps, who was concerned that a more conservative court would undermine environmental protections. “What’s impossible to exaggerate is that this is the final word on most issues in this country.”