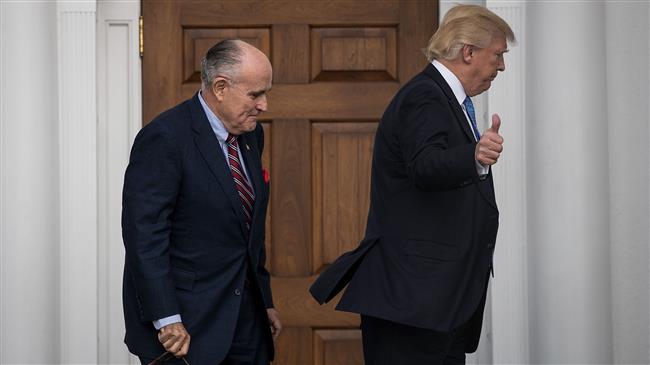 US: Trump’s refusal to participate in impeachment hearing shows he’s hiding something 0

The US House Judiciary Committee has called President Donald Trump’s refusal to participate in an impeachment hearing “unfortunate” and said that it is a sign that Trump has something to hide.

Chairman of the House of Representatives Judiciary Committee Jerrold Nadler’s response came after the White House sent a letter to him informing that the Trump administration would not participate in the hearing in the Wednesday impeachment hearing.

“Late last night, the President and his counsel turned down our invitation to participate in Wednesday’s hearing,” read Nadler’s letter.

“His response is unfortunate because allowing the President to participate has been a priority for the House from the outset. That is why the House included the opportunity to participate in H. Res 660,” Nadler said.

“The American people deserve transparency. If the President thinks the call was ‘perfect’ and there is nothing to hide then he would turn over the thousands of pages of documents requested by Congress, allow witnesses to testify instead of blocking testimony with baseless privilege claims, and provide any exculpatory information that refutes the overwhelming evidence of his abuse of power,” he noted.

Nadler also urged Trump not to block witnesses from testifying.

Nadler’s response came a day after White House counsel Pat Cipollone issued a five-page letter to the chairman, saying that Trump and his lawyers will not participate in the impeachment hearing this week due to a lack of “fundamental fairness.”

The judiciary committee is set to hold an impeachment hearing on Wednesday following weeks of hearings by the House Intelligence Committee that saw testimonies from 12 current and former administration officials.

The US president is accused of withholding military aid to Ukraine to force Kiev to investigate his Democratic rival, Joe Biden.

House Democrats launched an impeachment inquiry against Trump in September after a whistleblower alleged the Republican president pressured Ukrainian President Volodymyr Zelensky to investigate former Vice President Joe Biden and his son Hunter, who had served as a director for Ukrainian energy company Burisma.

The impeachment probe shifted to a public phase on November 13 after weeks of closed-door interviews in the House.

An overwhelming 70 percent of US adults think Trump’s action towards Ukraine was wrong, and a slim majority of Americans, 51 percent, believe Trump’s actions were both wrong and he should be removed from office, according to an ABC News/Ipsos poll released on November 19.

Three investigating panels, led by the House Intelligence Committee, are due to release a formal report this week when lawmakers return on Tuesday from a Thanksgiving recess. The report will outline evidence gathered by the Intelligence, Foreign Affairs and Oversight committees.

Members of the intelligence panel will review the report in a classified setting on Monday evening, and the full committee will consider and vote on it on Tuesday before forwarding it to the Judiciary Committee, according to an Intelligence Committee official and a person familiar with the matter.

Trump has denied any wrongdoing, calling the impeachment inquiry a “witch hunt.”