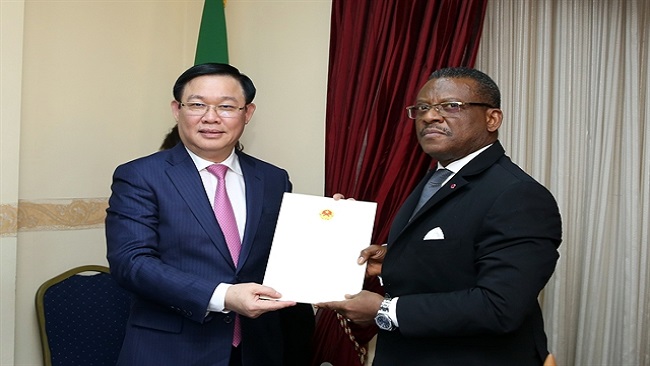 Deputy Prime Minister Vương Đình Huệ visited La Republique Du Cameroun on Friday and Saturday as part of his working trip to Africa.During the visit, Huệ had talks with Prime Minister Joseph Dion Ngute, visited the Senate and the National Assembly of the Parliament of Cameroon, and had working sessions with Vice President of the Senate Lamido Abubakary Abdulaye and Vice President of the National Assembly Etong Nzok Hilarion.

At the talks with PM Ngute, the Vietnamese Deputy PM affirmed Việt Nam’s policy on promoting multi-faceted co-operation, particularly in economics and trade, with African countries, including Cameroon.

Huệ said to facilitate stronger bilateral collaboration, the two countries should intensify negotiations for bilateral agreements, creating a legal framework for trade as well as co-operation in other fields.

He said Cameroon hoped to set up co-operative ties with Việt Nam, with a focus on sectors where Cameroon has great potential and Việt Nam is strong at, such as agriculture and processing of cashew nuts, wood and coffee. He added that his country wished to boost bilateral ties in telecommunications, which have already started with the operation of Nextel, a joint venture between Việt Nam’s Viettel group and Bestcam, a Cameroon partner.

Discussing support for Vietnamese businesses operating in Cameroon including Nextel, Huệ appreciated the work of the Cameroon government and PM Ngute to facilitate their operation.

He also noted the need to increase exchange of delegations between the two countries’ governments, sectors, trade associations and people, as well as promote co-operation in culture, education, sports and people-to-people exchange.
Source: vietnamnews.vn