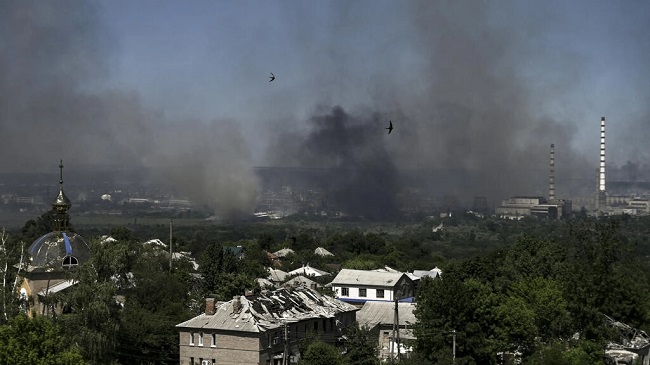 Russia’s defence ministry says its troops have killed “up to 80” Polish fighters in “precision strikes” on the Megatex zinc factory in Konstantinovka (Kostyantynivka in Ukrainian), in the eastern Donetsk region.

The region, claimed by Russia, has been the theatre of combat since Moscow began its offensive in Ukraine in late February.

Ukraine’s intelligence service says Russia is aiming to drag Belarus into the war, after missiles were fired from Belarusian territory into a northern border region.

“Today’s strike is directly linked to Kremlin efforts to pull Belarus as a co-belligerent into the war in Ukraine,” Ukrainian intelligence says on Telegram.

Ukraine says it suffered a “massive bombardment” from inside neighbouring Belarus, a Russian ally not officially involved in the conflict.

– Ukrainian forces to withdraw from Severodonetsk –

Ukrainian forces are preparing to retreat from the strategic city of Severodonetsk after weeks of fierce fighting, a setback that could pave the way for Russia to seize a larger swath of eastern Ukraine.

Sergiy Gaiday, the governor of the Lugansk region, also says Russian forces are advancing on the twin city of Lysychansk, which has been facing increasingly heavy Russian bombardment as Moscow pursues its offensive on eastern Ukraine.

“Remaining in positions that have been relentlessly shelled for months just doesn’t make sense,” says Gaiday, with 90 percent of the city damaged.

Capturing Severodonetsk and Lysychansk would give the Russians control of Lugansk, and allow them to push further into Ukraine’s industrial heartland of Donbas.

US sees Severodonetsk as ‘small gain’ for Russia

The United States is playing down the importance of Ukraine’s retreat from Severodonetsk, with the Pentagon saying it means a “very small, very incremental gain” for Russia.

“What (the Ukrainian troops) are doing is putting themselves in a position where they can better defend themselves,” a senior Pentagon official tells reporters.

“After decades of lost policies based on aggression, coercion and lack of respect, all that Russia can do now is to spit threats against other states,” Foreign Minister Dmytro Kuleba tweets. “All it does is show Russia’s weakness.”

President Volodymyr Zelensky has hailed a “historic” decision by European Union leaders to grant candidate status to Ukraine, a decision the Kremlin has dismissed as “domestic European affairs”.

It will take Ukraine a decade to build infrastructure to replace its Black Sea ports, whose blockade by Russia is preventing grain exports around the world, Ukraine’s deputy agriculture minister says.

Millions of tonnes of wheat and other grain have been stuck in Ukrainian ports since Russia invaded in February, sparking global concern about hunger and food prices.

“For alternative routes, it would take 10 years of investment to try to build the necessary infrastructure to replace this Black Sea port infrastructure, which we spent about 20 years building, starting in 2000,” Taras Vysotskiy tells AFP.

The BRICS group of nations says it backs talks between Moscow and Kyiv, after a virtual summit held against the backdrop of the Ukraine conflict.

The group comprising Brazil, Russia, India, China and South Africa accounts for more than 40 percent of the global population and nearly a quarter of the world’s gross domestic product.

Russian President Vladimir Putin on Thursday urged the group to snub Western countries who have imposed drastic sanctions on Moscow.