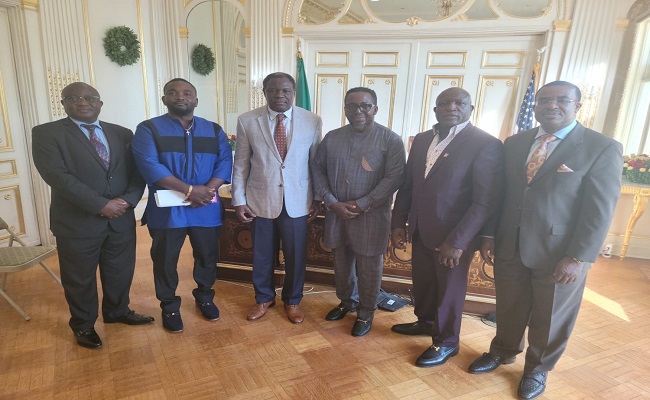 During the meeting, the delegation and the head of Cameroon diplomatic mission in the US examined the difficulties encountered by importers at the port in Douala, the prolonged strike action by clearing agents, hike in import duty, and harassment by custom officials in the port.

Ambassador Etoundi Essomba assured to support the US based Cameroonian businesses on a priority basis and promised to raise the issues with the authorities concerned to facilitate imports from the US by pushing for the creation of a section at the Douala port that will be responsible for evaluating containers from the United States.

The Cameroonian top diplomat said he was grateful to the business delegation for their keen interest in accelerating their investment in Cameroon.

Speaking after the meeting, Professor Kenneth Ojong said the delegation requested the ambassador to invite the Minister of Finance and the Director of Customs to the United States to meet with over 300 businessmen and women who do business with Cameroon in a bid to encourage others to make investments.

Kenneth Ojong also revealed that Cameroonian business community in the US want a review of the CEMAC taxation policy which does not favour Cameroon and has been reducing the potential of Cameroon becoming an economic hub.