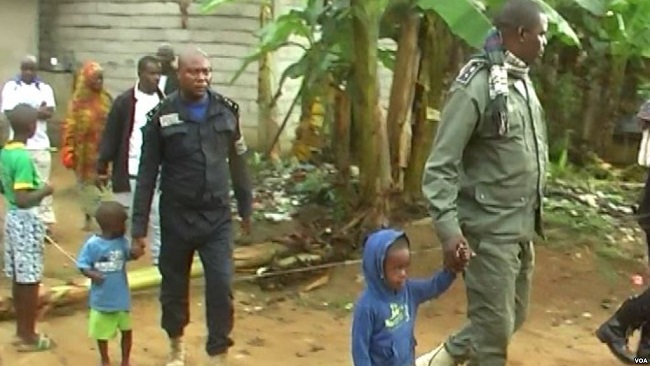 Cameroonian authorities say they have dismantled a network of child traffickers responsible for dozens of abductions in the region over the past several months. The network is said to have extended into neighboring Gabon, Equatorial Guinea and Chad.

The operation intensified after three young children were found dead in the back of a truck, prompting angry residents to torch a hotel owned by alleged traffickers.

Hundreds of people are still visiting the neighborhood where the inn was razed last Tuesday by an angry mob in Cameroon’s southern town of Kiossi, on the border with Gabon and Equatorial Guinea.

Thirty-nine-year-old Vanessa Nzali was among parents of missing children who arrived in Kiossi Friday. She says she had traveled some 280 kilometers from Cameroon’s capital Yaounde when she heard that unidentified children had been found there by Cameroonian police. She says she immediately decided to travel to Kiossi to see if her missing 11-year-old daughter was among the children.

Nzali says four months ago she returned home from work and was informed by her neighbors that her daughter went to fetch water from a well and four men forced her into their car and drove off. She says her neighbors also told her there was a baby crying in the car.

Quetong Handerson Kongeh, the most senior Cameroon government official in the Ntem Valley administrative unit that includes Kiossi, says the inn was razed after a vehicle belonging to its owner was found with the three dead children who, as determined later, were aged two, four and seven years old.

“At about 2 p.m., their parents started looking for them and could not find them. These children had been kidnapped by some suspects who took them into an inn deep down into the quarter in Kiossi. They administered some toxic products and these children went off [died]. They now put these children inside bags and tied them, and put all of them in the back booth of a vehicle.”

Handerson Kongeh says 15 people suspected to be members of a network of child traffickers operating in Cameroon, Gabon and Equatorial Guinea were arrested when investigations were opened.

In 2016, the Yaounde-based Interpol office for central African states reported that thousands of children, alongside men and women, were forcibly abducted in Cameroon, Chad, Central African Republic, Gabon, Equatorial Guinea and the Republic of Congo to be used as combatants, cooks, guards, sex partners, servants, messengers, and spies.

Patricia Asta of the local non-governmental organization Children’s Rights says child kidnapping has increased in Central African states because many childless couples and mothers are ready to buy from the black market. She says some are forced to serve as commercial sex workers, while others are recruited or kidnapped and then transported to far away places where they are forced to work as pickpockets, beggars and drug transporters.

Asta says within the past several months at least 26 cases of abductions have been reported to her NGO, with parents saying their children either were tricked, forced or persuaded to leave. She says they also have had cases of children who were held for ransom.

She says her organization has decided to educate parents to be vigilant. It is also asking all victims to join the associations’s lawyers in legal processes that will protect and free children from predators who are out to target mainly naive teenagers. She says it is her wish to see to it that all child traffickers are punished.

Cameroon, according to the 2012 trafficking in persons report by the U.S. State Department, also is a source, transit, and destination country for children subjected to forced labor and sex trafficking.