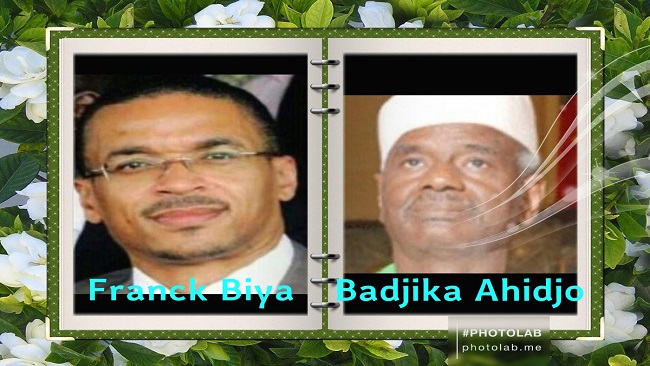 Biya succession: Will it be a tug of war between Franck Biya and Mohamadou Ahidjo? 0

The Emmanuel Macron administration in France is currently constituting a small clique of senior army officers in the presidential guard in Yaoundé to propel Franck Biya to fill the anticipated vacancy that will be created soon by the demise of his father, Paul Biya, president of La Republique du Cameroun, Cameroon Intelligence Report has gathered from reliable sources in the French capital, Paris.

In La Republique du Cameroun, the National Assembly, the Senate and the Constitutional Court are all dominated by the ruling CPDM crime syndicate that is ever ready to endorse any French backed coup.

Paul Biya is a personal friend to nearly all prominent French politicians including Francoise Mitterrand, Jacques Chirac, Francoise Hollande and the disgraced Nicolas Sarkozy. The 88-year-old has been in power for more than 38 years, thanks to a 1984 coup, systematic electoral fraud, the faithful allegiance of an army packed with supporters and members of his Francophone Beti Ewondo ethnic group, solid Western support (especially from Paris), and corrupt management of Cameroon’s meagre economic resources.

The Cameroonian constitution has been rewritten so many times so that the old butcher in Yaoundé could become president for life.  The revisions have hampered all main opposition candidates including Fru Ndi and Maurice Kamto and it is now helping the Biya family to clear the way for Franck Biya, who was appointed Special Adviser to his father some years ago.

Franck Biya has never been put in charge of anything in Cameroon. He only mismanaged a vast family empire in timber with an estimated value of several billion CFA francs.

While all eyes are on Franck Emmanuel Biya, presented as a potential successor and next president of La Republique du Cameroun, supporters of Badjika Mohamadou Ahidjo, son of the first head of state have reportedly announced a big rally in Yaoundé slated for July 21 2021.

Our Yaoundé city reporter who contributed to this report noted that for the moment, the initiators of the Badjika Mohamadou Ahidjo Yaoundé rally are unknown to the general public.  But what we do know is that for several weeks now, a curious armed group- the Movement for the Liberation of Cameroon (MLC) has been threatening the Biya regime from the Far North Region.

However, this so-called pro Badjika movement has announced its presence in the nation’s capital at a time when the Franck movement has been openly asking Franck Biya to declare himself a candidate for the 2025 presidential election.

According to French Cameroun political elite, Prof. Mathias Eric Owona Nguini, the MLC aims to create a hybrid war to cut Cameroon in two, between the north and the south in order to make the country ungovernable.

To Owona Nguini’s theory, the north would include the regions of Adamaoua, the North and the Far North as well as part of the East.