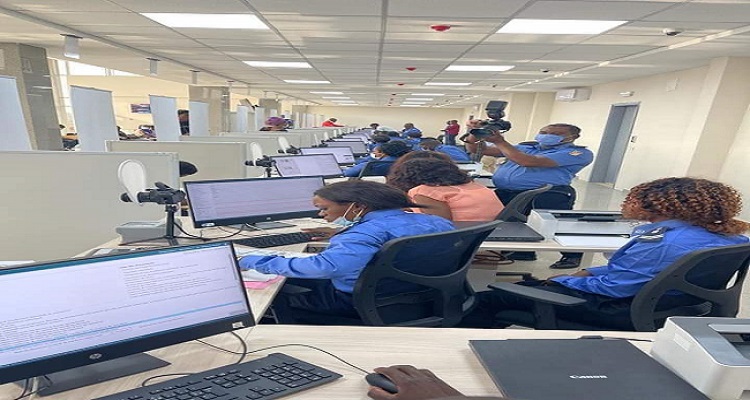 Cameroon has come up with a massive and modern digital passport production office, but old habits will always die hard.

The new digital system is designed to help reduce frustration and the corrupt practices that characterized the old system.

The old system provided a platform for self-enrichment to corrupt police officers who never hesitated to extort money from the helpless public.

Over the last two years, obtaining a passport in Cameroon has been a lot tougher than going through the eye of a needle, with passport officials asking for close to USD 1,000 for a passport, especially if the passport applicant was in a rush.

For those who wanted to go through the normal process, the issuing of an ordinary passport could take up to a year if the “Lords of the Universe” were in the right mood to do their job.

Cameroon is a country where there are no checks and balances. It is a country wherein a police officer can cook up a story and lock you up for years and this has struck fear in the minds of most French-speaking Cameroonians.

The country has no recourse mechanism and if they do exist, the objective is always to please the gullible international community that has been dumping money on the country, hoping that the country’s numerous and complicated issues could be addressed by throwing huge chunks of money at them.

The reckless behaviour is indeed the hallmark of the country’s passport production office. A police officer has the prerogative of charging the country’s citizens hundreds of dollars for just a passport and when those passports get produced, the frustrated citizens have no way of knowing that their documents have been issued.

This is what centralization can do to a country. But if you think that is the worst scenario, just take a trip to the old passport office and you will find a mountain of unclaimed passports just sitting outside the office and nobody really cares. The interest of the citizens is never paramount.

This is even a great sight to behold by the country’s standards. In certain circumstances, a drunken or angry police officer could scoop a bunch of passports and dispose of them at the nearest garbage bin and nobody will ask any questions.

This is the country of great ambitions and emergence. Like a friend said, Cameroon seems to be emerging into unprecedented chaos which is being ignored by the country’s authorities and tolerated by the citizens who do not know where to take their anger and frustration to.

The new passport office is designed to be a panacea for all the headaches that characterized the old office, but not many Cameroonians are hopeful. The government has been selling illusions for decades and many desperate citizens hold that their beloved government might simply be repackaging and old lie to sell it to its citizens.

No government in the world knows how to beautify a lie. This is a government that can put lipstick and mascara on a pig and sell it to the public, claiming that the pig is the most beautiful girl in town.

For more than four years, the country has been dealing with a bloody civil war, with the country’s English-speaking minority seeking to walk away from a hastily put together union.

In response to the demands of the English-speaking minority, the government has been claiming that only decentralization can address the core issues that are splitting the country.

To deceive the international community, an ill-planned national “monologue” was organized, with members of the country’s ruling crime syndicate known as the CPDM taking decisions that will only help them perpetuate their stay in power.

At the end of the day, their decentralization agenda was upheld and promoted. They added something new to their Machiavellian plan, calling it Special Status which was nothing but a scheme designed to hoodwink the English-speaking minority into abandoning their plan to walk away from the lopsided union called the United Republic of Cameroon.

From every indication, the Yaoundé government has been paying lip service to the whole notion of decentralization and the strong centralization of the country’s passport issuing process in Yaoundé is just a reminder to the English-speaking regions of the country that their hope for a better life in Cameroon will never be a reality.

Does this imply that someone living in Mamfe and needs an urgent passport, will be heading to Yaoundé to face the uniformed crooks who have made life unbearable to the ordinary Cameroonian?

What happened to Buea which is a lot closer to Mamfe than Yaoundé? When will the Yaoundé government understand that little actions and acts can go a long in calming down flaring anger?

Old habits really die hard and the Yaoundé government which is made up of “living ancestors” and is used to old ways will surely not be embracing new ways anytime soon.

If Cameroonians think they will one day know an easy life in their own country, then they must act differently.

Their leaders are not going to embrace new ways and they do not care if their out-dated ways are killing every Cameroonian.

The country’s leaders see themselves as the new colonial masters and they will stop at nothing to ensure their citizens go through excruciating physical and psychological pain.