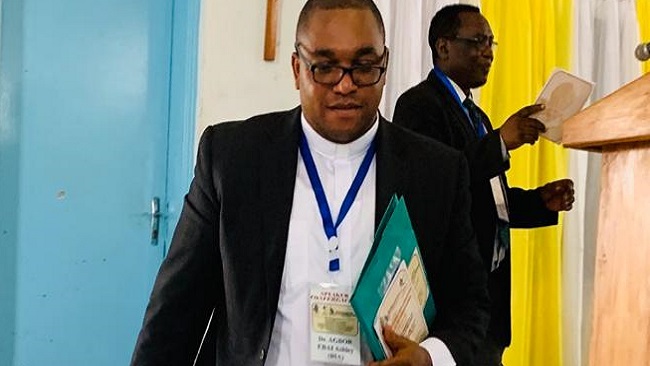 Holy Week and the Trajectory of World History 0

He had always loved those who were his in the world, but now he showed how perfectly his love was” (John 13:1)

This Sunday, we celebrate what our Christian tradition calls Palm Sunday, which is the start of Holy Week. St Paul writes to us in his Letter to the Romans: “But what proves that God loves us is that Christ died for us while we were still sinners. Having died to make us righteous, is it likely that he would now fail to save us from God’s anger?” (Romans 5:8-9). Given the times that we are living in, it might be difficult for many to believe in the love of God. Even for the believer, it can be very tempting, a great trail of faith. But Holy Week has something to say, even to the perilous and precarious situation of a world plagued by COVID 19. Holy Week tells us that though we can humanly be paralyzed by fear, the fear of the unknown, the fear of the present and the future, the fear of death, as disciples in mission to the world, we have a message to the world of the Coronavirus. There is no denying that uncertainties leave us profoundly disturbed, especially the uncertainty of contracting a deadly virus. The Second Vatican Council (1962-1965) wrote these words that I find meaningful to us today, perhaps more so than when they were first written. Permit me make an extensive citation from the Pastoral Constitution of the Church in the Modern World, Gaudium et Spes:

“Nevertheless, in the face of the modern development of the world, the number constantly swells of the people who raise the most basic questions or recognize them with a new sharpness: what is the human being? What is this sense of sorrow, of evil, of death, which continues to exist despite so much progress? What purpose have these victories purchased at so high a cost? What can men and women offer to society, what can they expect from it? What follows this earthly life?

The Church firmly believes that Christ, who died and was raised up for all, can through His Spirit offer man and woman the light and the strength to measure up to their supreme destiny. Nor has any other name under the heaven been given to man and woman by which it is fitting for them to be saved. She likewise holds that in her most benign Lord and Master can be found the key, the focal point and the goal of man, as well as of all human history. The Church also maintains that beneath all changes there are many realities which do not change and which have their ultimate foundation in Christ, who is the same yesterday and today, yes and forever.

It is in the face of death that the riddle a human existence grows most acute. Not only is man tormented by pain and by the advancing deterioration of his body, but even more so by a dread of perpetual extinction. He rightly follows the intuition of his heart when he abhors and repudiates the utter ruin and total disappearance of his own person. He rebels against death because he bears in himself an eternal seed which cannot be reduced to sheer matter. All the endeavors of technology, though useful in the extreme, cannot calm his anxiety; for prolongation of biological life is unable to satisfy that desire for higher life which is inescapably lodged in his breast. Although the mystery of death utterly beggars the imagination, the Church has been taught by divine revelation and firmly teaches that man has been created by God for a blissful purpose beyond the reach of earthly misery.

In addition, that bodily death from which man and woman would have been immune had they not sinned, will be vanquished, according to the Christian faith, when man and woman who was ruined by his own doing is restored to wholeness by an almighty and merciful Saviour. For God has called man and woman and still calls them so that with their entire being they might be joined to Him in an endless sharing of a divine life beyond all corruption. Christ won this victory when He rose to life, for by His death He freed man and woman from death. Hence to every thoughtful man and woman a solidly established faith provides the answer to his anxiety about what the future holds for him. At the same time faith gives the human being the power to be united in Christ with his loved ones who have already been snatched away by death; faith arouses the hope that they have found true life with God. The root reason for human dignity lies in man and woman’s call to communion with God. (Gaudium et Spes, #10, 18, 19).

Dear Holy People of God, as we continue to live with hope during these uncertain times, let us remember that the Christian’s ultimate hope and meaning in life resides in Jesus Christ, who died and rose again from death, opening the possibility of eternal bliss with God for all humanity. Yes, it is human to fear death. But it is Christian to know that in Christ, the dead do not enter into nothingness, into extinction, but enter into what Gaudium et Spes calls the “blissful purpose beyond the reach of earthly misery.” And Holy Week teaches us that it takes a certain kind of people, a certain kind of life, to be able to enter into this blissful mystery at the end of our biological life here on earth.

St John gives us what that kind of life is: “It was before the festival of the Passover, and Jesus knew that the hour had come for him to pass from this world to the Father. He had always loved those who were his in the world, but now he showed how perfectly his love was” (John 13:1)! That is the message we Christians have for a frightened world, a world, perhaps, in need of a new soul, a new direction: That in spite of the global pandemic of Coronavirus, in spite of all the uncertainties marking life in the present, God loves the world (John 3:16), God has not abandoned the world, God will never abandon the world. In Jesus Christ, one of the human race, of us, a truly human being (Council of Chalcedon), has definitely responded to God’s love for the love, a love that binds God forever to the human condition. In Jesus, a human being has definitely committed humanity in a resounding YES to the God’s offer of love for the world. And because of this irrevocable commitment of a human being to the irremovable offer of love to the world by God, the believer, in Christ, with Christ and to Christ (Augustine of Hippo), brings this Divine love to the world. The believer offers the world the GPS of Love that reflects itself in love for other and prepares us for eternal bliss with God. Only a heart that loves can enter into the mysteries of Holy Week, the Week of God’s Total Love that changed the trajectory of world history from the human tendency to absolutize economics, politics, science, power, et cetera, to a civilization of mutual love.