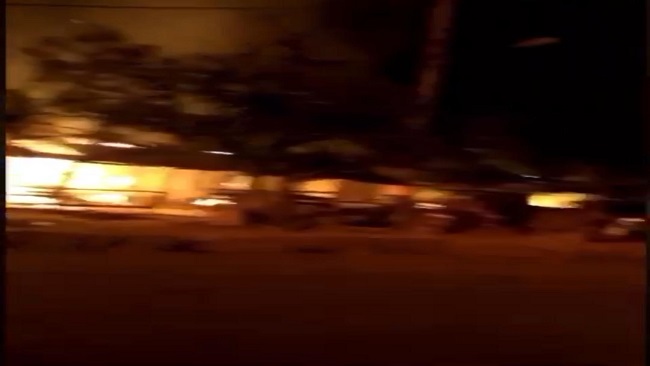 Mamfe Hospital Disaster: The army is to blame! 0

The news of the burning of the Manyu District hospital has hit many Cameroonians like a ton of bricks and many are asking many questions. What could have pushed anybody to burn down a hospital that is serving more than forty thousand inhabitants of the town of Mamfe and its environs?

From the first analysis made by the Cameroon Concord News Group’s correspondent in Mamfe who has visited the ruined buildings, it is evident that gasoline was used in the burning down of up to ten wards of the hospital.

“This is a coordinated act. How was this gasoline transported to the hospital when there are multiple checkpoints in and around Mamfe, the capital city of Manyu Division? There is a checkpoint in Mile One, there is another checkpoint opposite the hospital and there is a huge army camp in Besongabang, some two kilometers away from the hospital. How come none of the soldiers saw anything?” Our correspondent in Mamfe asked.

“I have been talking to many people around town and they say they saw soldiers heading in that direction yesterday at about 9pm Mamfe time and after they got into the hospital, there was a massive exchange of gunfire which sent the residents of the town to deck for cover in their homes, especially those living opposite the hospital. The military has to answer for this and there is nothing that will convince the people of Mamfe that the military is innocent,” our correspondent said.

“The government must launch a massive and transparent investigation and the investigators must talk with the people of Manyu Division if the facts must come out. There are many people who know the truth, but they are scared of talking. It is alleged that two French-speaking military officials had been seen in the day ferrying fuel from place to place, but the population thought nothing of it. The people of Mamfe thought it was the military and that the soldier might be travelling overnight, so they need extra fuel for their trip. These military officials must be investigated,” he said.

“There is much talking in Mamfe that the military thinks that carrying out such acts of violence and irresponsibility will intimidate the population into disconnecting from the rebellion. But this act is certainly going to be counter-productive. The people of Mamfe are angry both with the military and Amba fighters who do not have the capacity to undertake such a massive operation. I have called one of the Amba soldiers in Nchang, some three kilometers from the hospital, and he has stressed that they had not carried out any operations in that area. I have also talked with Amba generals in Mfuni and Ossing and they have also said that they cannot be destroying a hospital that is helping their own people. They have clearly pointed an accusing finger at the military, adding that how could that have happened when the military is directly opposite the hospital. There are many military checkpoints in Mamfe, and it is surprising that such an elaborate scheme can be implemented without the knowledge of the military,” he stressed.

“I am still investigating, but there is a lot of tension out here. The military seems to be hiding something. Our traditional chiefs must come together to produce a joint statement that will soothe the minds of our people. The people are angry, and they want the military to pay for its crime. Chief Oben, the Paramount Chief of Mamfe, has been seen this morning and he is clearly disappointed with the situation. He was a chief medical officer of this hospital before retiring and he did a great job renovating the hospital. The people are looking up to him for a fund-raising event that can result in the mobilization of massive resources to rebuild the hospital,” he underscored.

Meanwhile, sources in Yaoundé have indicated that the government is aware that there are many military officials who want the struggle to continue because they are making huge gains from the people’s suffering. The source, which spoke on condition of anonymity, said that the government is currently watching some army officials who are being suspected of stoking the fires in Southern Cameroons.

“The government is aware of the malicious intentions of some of its military officials who want the crisis to continue because the situation is helping them to live like maggots in bacons in Yaoundé. The government has not yet had enough probable cause to arrest them, but undercover agents are working very hard to uncover the secret plots put in place by these ignoble characters who are causing the country to continue to bleed. It is a matter of time. They will be unmasked,” the source said.

Meanwhile the Cameroon Concord News Group is calling on Manyu sons and daughters to organize fundraisers so that the hospital can be rebuilt in a very short period of time. While it is the government’s responsibility, the Board of Directors of the Cameroon Concord News Group holds that if the people of Manyu Division can come with lots of money, the government will be obliged to cave in and avoid the long procurement procedures that may delay things.