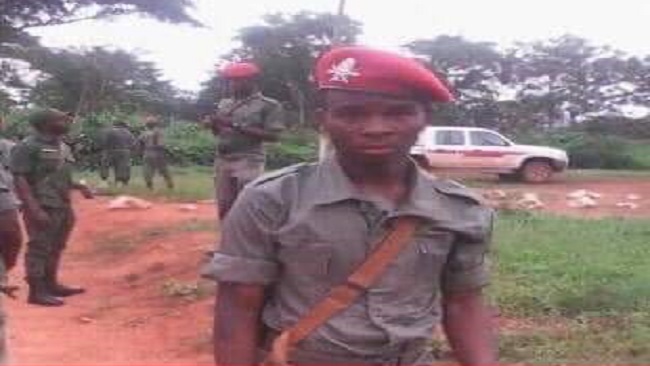 The Yaounde government has resorted to using child soldiers in its bid to restore peace and order in the two restive English-speaking regions of the country.

With many soldiers defecting or deserting the army, the government seems to be desperate and it has been organizing recruitment drives in East Cameroon, especially in the South region whence most of the country’s ministers hail.

Kids of less than 18 years are made to believe that political power is theirs and that Southern Cameroonians are challenging their authority.

Most of the young soldiers are even drugged and many do not even understand why they should be killing their fellow countrymen.

The fear of death has caused many of them to desert and those who have committed some of the worst atrocities are today suffering from Post Traumatic Stress Disorder (PTSD) and are not receiving any government assistance.

The Southern Cameroons crisis, which started in 2016, has resulted in the deaths of some 2,000 soldiers, most of whom are from the ethnic group of the country’s president, Paul Biya, who has ruled the country for almost 38 years and has nothing to show for such a long stay in power.

The crisis, which has destroyed the economic and social infrastructure of the two English-speaking regions of the country, has also had a huge impact on the country’s economy.

Many state-owned corporations in the two English-speaking regions of the country have been put out of business because of the conflict that has pitted the gerontocratic government in Yaounde against Southern Cameroonians who hold that they have been marginalized for more than five decades.

The country’s second employer, the Cameroon Development Corporation (CDC) has taken a blow to the liver and it will take a long time to put it back on the right path.

PAMOL, another major employer and a provider of a great revenue stream to the government, has simply been deleted from the face of the earth, as angry fighters have set fire to its facilities across the entire Southwest region of the country.

SONARA, the country’s lone oil refinery, has gone up in smoke and it will take huge amounts of money to bring it back to working order.

The country has been all over the world looking for much-needed resources to rebuild the refinery.

The government has been sending delegations to development finance institutions like the African Development Bank and the World Bank to source for funding, but their efforts have not produced and admirable results, as donors are reluctant to pour money into a country they consider as a dry hole because of government corruption and inefficiency.

With the elections approaching, more troops are being deployed to the two English-speaking regions of the country and not many will be returning to their families, as Southern Cameroonian fighters have acquired more sophisticated weapons and are willing to bring down anybody who stands in the way of their effort to restore their country’s independence.

Some 700 soldiers have already been sent to the two English-speaking regions of the country, but many have already escaped and others have lost their lives after exchanging fire with tough Southern Cameroonian fighters.

The situation is dire and the international community must intervene if the entire sub-region has to avoid the type of chaos that has plague other parts of the continent.