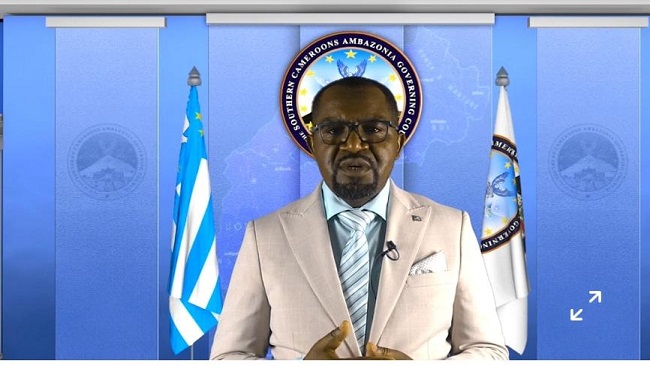 The Vice President of the Ambazonia Interim Government Dabney Yerima has sent an indirect message to French Cameroun authorities, calling on them to free the leader of the Ambazonian nation President Sisiku Ayuk Tabe and his top aides known as the NERA 10.

In a phone conversation with an opposition MP from the Julius Malema’s Economic Freedom Fighters party in South Africa on Friday morning, Comrade Dabney Yerima followed up on the fate of all Southern Cameroons detainees in French Cameroun including the Ambazonian leader asking the South African opposition MP to help to convey the Ambazonia Interim Government’s call for the release of all Southern Cameroons citizens in French Cameroun jails.

The Francophone dominated army and the National Gendarmerie have arrested hundreds of Southern Cameroonians since 2016 on lame and ridiculous charges such as taking part in anti government protest or having images of the Southern Cameroons war in mobile phones.

During the Friday phone conversation, Vice President Dabney Yerima also thanked the MP for the support Southern Cameroonians were getting in South Africa.

This comes as the Ambazonia Interim Government continues to build solid relations with political parties in the Southern Africa region.

Elsewhere in the conversation, the Ambazonian leader pointed to the deliberate silence being maintained by the African Union on the deteriorating situation in Southern Cameroons.