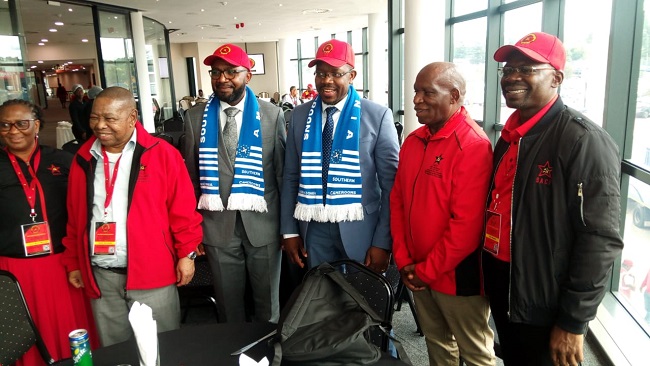 Southern Cameroons Vice President Dabney Yerima has told leaders of the South Africa Communist Party that the French Cameroun military has killed more than 22,000 Ambazonians in his country and has brought it to a standstill noting that Southern Cameroonians in Ground Zero have been weakened by 4 years of war.

Appealing for more international help, Vice President Dabney Yerima described the devastating effects of the French Cameroun imposed war on Southern Cameroons in a speech in South Africa that was broadcast by the Southern Cameroons Broadcasting Cooperation (SCBC)

Below is the full text of what Vice President Dabney Yerima delivered in South Africa:

Revolutionary greetings to all Comrades, Chairpersons & members of SACP! We address you on behalf of our people, the people of the Southern Cameroons, renamed Federal Republic of Ambazonia, and now in the 4th year of a liberation war after 58 years of recolonization by La Republique du Cameroun.

Viva the Freedom of Ambazonia

We thank the SACP for inviting us to Congress and for putting the question of the Freedom of Ambazonia on the table of Progressive Movements.

Comrades as some of you are aware, there is a genocide going on in the Southern Cameroons-Ambazonia right now. It is being carried out by the French Cameroun military. So far,

From our statistics, the Ambazonian war of independence can directly be painted as one of the most neglected conflicts in the world.

Our struggle is that of the liberation of our people.

Ambazonians have suffered suppression, operation and failed assimilation by La Republique du Cameroun that continues to practice Black on Black colonialism almost 60 years after 1960 on our people through brutal military suppression like was the case of apartheid South Africa before liberation.

For almost four years now, our children have not gone to school due to the war. This is one of our biggest pains.

A free South Africa as a result of your sacrifices and struggle has continued to give back to our people their dignity as human beings. The people of Southern Cameroons are going through fear, abuse, death and hopelessness.

What are our expectations and appeal to the South African Communist Party:

1. Help us alongside alliance partners and other progressive movements to ask South Africa to table for the United Nations to send an independent fact finding mission to Southern Cameroons in order to establish the facts and start holding perpetrators to book so that the killings by cameeoon military stop in our communities

2. Our struggle for freedom as an undecolonized United Nations trust territory dates back to 1961 and we plead the SACP help our young movement by pushing for its solidarity and alliance partners to pay attention to our peoples struggle and help as mentors in our liberation process.

3. That the SACP issue a statement or start a campaign demanding the release of our leaders from la republic du Cameroon jails  abducted from Nigeria and illegally refueled to Cameroon where they continue to suffer inhumane treatment. We demand for their unconditional release in accordance with the recent Abuja high court judgment that the abduction was illegal.

4. We appeal the Southern CAMEROONS liberation be made a policy item of the SACP so more attention is accorded it.

African Liberation Father Nkwame Nkrumah said no African must rest until all of AFRICA is free.