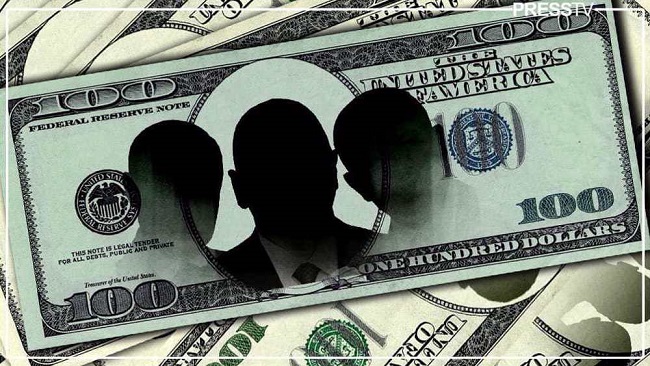 The only surprise when it comes to the Pandora Papers revelations, exposing the scale of the greed and corruption of various world leaders, political figures and officials in hoarding obscene amounts of cash in offshore tax havens, is that anyone should be surprised.

We are living through a crisis of late capitalism, an economic system whose many and manifold contradictions have been exacerbated by a global pandemic. And we have reached the point where huge imbalance in wealth within states, between states – and also within and between regions – is no longer tenable. What is also no longer tenable is the clawing hypocrisy that underpins Western liberal democracy.

The man who more than any other has exposed this hypocrisy is Julian Assange, currently languishing in Belmarsh high security prison in London awaiting the outcome of the US government’s appeal against the decision of a British judge towards the end of 2019 not to allow his extradition to the US on grounds that his treatment there is likely to amount to cruel and unusual punishment.

The level and intensity of the persecution Assange has been made to endure is a measure of the extent to which he removed the flowery curtains of democracy and human rights behind which the savage beast of US-led Western hegemony resides. In exposing the vicious and racist character of the occupations of Iraq and Afghanistan, the mountain of war crimes committed in their name, Julian Assange and Wikileaks quickly became a greater and more potent threat to the ability of the Empire to continue as normal than a thousand bayonets.

In societies underpinned by justice and decency instead of injustice and hypocrisy and lies, Julian Assange would be celebrated and lionised for his courage and fidelity to the truth in awakening the masses to the high crimes and war crimes committed by the powerful in their name. We don’t in the West live in such societies, however, which is why Assange has and continues to suffer the prolonged persecution at the hands of the medieval minds who sit at the apex of power in Washington and London.

The journalists responsible for the Pandora Papers story have been hailed as truthtellers and can no doubt look forward to being showered in awards for their efforts. The only difference between them and Julian Assange is the willingness to dig down into the very belly of this warmongering beast in Washington, responsible for unremitting death and destruction since the demise of the Soviet Union in the early 1990s, and show the world its entrails.

“It is the job of thinking people not to side with the executioners,” French philosopher and thinker Albert Camus tells us, and since the aforementioned demise of the Soviet Union the executioners of our time have been on the march, leading to the executions of Yugoslavia, Afghanistan, Iraq, and the putative executions of Cuba, Venezuela, Syria, and Iran, et al.

Julian Assange walks in the same tradition as Albert Camus. Like him he is a man of fierce moral principle who could, if he’d so wished, have ploughed the same lucrative furrow as the journalists over at the Guardian do. This is the same Guardian that squeezed Assange like a lemon, enjoying the prestige of publishing the explosive revelations that came his way as head of Wikileaks, before tossing him aside when the going got tough and fabricated allegations of sexual abuse came down the pipe against him from Sweden.

“Better to reign in hell than to serve in heaven,” is the Miltonian line from his classic 17th century poem, Paradise Lost, yet what we have with our mainstream journalists are people who made their peace with those who reign in hell and willingly serve the lie that this is the best of all possible worlds.

The revelations contained in the Pandora Papers are seismic, but compared to those contained in the Afghanistan and Iraq war logs, released by Julian Assange and Wikileaks, merely skim the surface of the depravity of the rich and powerful.

Every second of every day Julian Assange spends in prison stands as an indictment of Washington and its servile British ally. Yet on the level of consciousness, Julian Assange is not in prison we are. He has been to the mountaintop, as Dr King famously proclaimed towards the end of his life, but unlike Dr King Assange did not see the Promised Land there, he saw instead the broken land created in the name of US foreign policy.

There are no words to describe the foul stench of hypocrisy that permeates the corridors of power and corridors of mainstream newspapers and news organizations in the West. They are all part of the same lie and in order to live with themselves, they banish truth into the wilderness as if banishing a heretic.

Julian Assange is the great heretic of our age. He stands in the tradition of all the brave men and women in history who dared to say “No,” regardless of any personal sacrifice and cost involved. It is the job of all right- thinking people never to forget him or forgive those responsible for his plight.