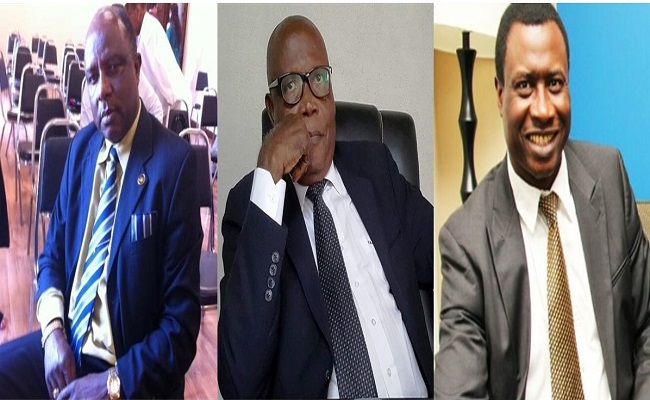 The turmoil engulfing the so-called Sako-IG has turned to near chaos as its spokesman Chris Anu is now fighting for his survival and relevance after being sidelined in a move teleguided by Irene Ngwa. Many within the Maryland based Southern Cameroons group are considering a mass exodus back to the main Southern Cameroons Interim Government headed by Vice President Dabney Yerima.

The weeks-long Maryland IG battle has split Dr Ikome Sako from his acolyte, Chris Anu. And Mrs Irene Ngwa is now being referred to as a prostitute by senior members of her own group.  In the words of Mr. Chris Anu, Irene Ngwa’s legs are constantly open and all over the place and she is not prepared to give ABC TV a good bill of health.

Ikome Sako is yet to comment on the matter even though he remains the chair of the Maryland cabal that has contributed immensely to weaken the Southern Cameroons resistance.

It is all about money and keeping the ABC TV alive as an anti President Sisiku Ayuk Tabe tool where the likes of Fru John Nsoh go on air to make a mockery of the jailed Southern Cameroons leaders.  Behind Sako’s blue-chip image, there’s a pattern of breakups. But Chris Anu may not survive anymore within that camp.

Sako and his men learned of Mr. Chris Anu’s intentions through an audio message and the disgraced Southern Cameroons frontline leader was quoted as saying that Chris Anu is no longer committed to the Sako IG, its donors, and its stakeholders, he should resign.

Hours after ABC TV went off air for unpaid satellite bills; Mr. Chris Anu blamed it all on Irene Ngwa and Sako. However the two Southern Cameroonians reportedly in a luvie duvie relation have maintained a kind of silence of the lamb.

The conflict at the ABC erupted after the executive wing of the Sako IG blocked a drafting process that was supposed to raise money. It is hard to explain if Sako or Irene Ngwa were aware of the drafting plan as stated by Mr. Chris Anu in his audio message.

From every indication, Southern Cameroonians in the US and Canada are no longer interested in financing the Chris Anu propaganda which has been counterproductive to the Ambazonian struggle.  Chris Anu’s latest audio message and his actions demonstrate a disregard for good governance within the Maryland Ambazonian group and create a grave amount of risk for the Sako IG at an especially sensitive time.