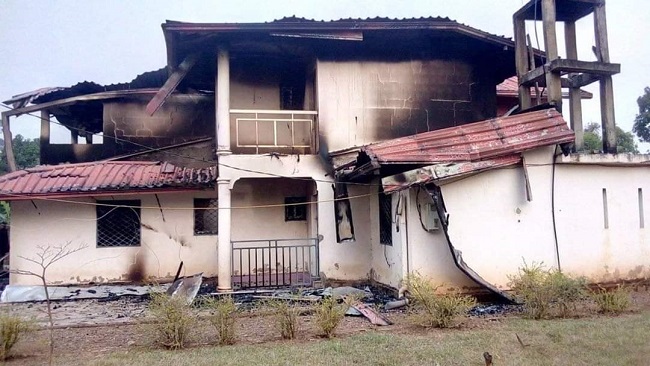 A few days ago, Cameroon’s President, Paul Biya, convened an emergency meeting of his cabinet and for days, it seemed like nothing would filter out. As usual, it does not take long for some people to start spilling the beans, and this is what is happening.

The Southern Cameroons crisis that has put the country in the spotlight for all the wrong reasons was at the top of the agenda. The African Union, like the United Nations, has finally decided to break its silence, and this has ruffled the Yaounde government.

Last week’s elections did not meet African Union standards and they were held against the backdrop of military violence, with some 8,000 Southern Cameroonians escaping to Nigeria, according to the United Nations. The mass movement was prompted by government violence and lack of security in the two English-speaking regions.

According to the African Union, last week’s twin elections which took place on 9 February were held in a context marked by political and security tension. They were also marked by the absence of a consensus among the political actors. This, the African Union believes, affected the inclusive character of the elections and the mobilization of voters.

The African Union has therefore called upon the government of Cameroon and political actors to pursue efforts that will help to ease the tension.

The African Union also recommended that the government should take necessary measures that will ensure citizen participation and inclusion in all decisions in order to ensure that peace and security return to the country.

The continental body urged the government to establish a dialogue framework that will bring together all political actors, adding that such measures would restore confidence and foster peace in the country.

With the bad news from the African Union and the United Nations, the country’s president felt that his credibility as a leader had been called into question. He had to act, though he is not known for taking swift actions, especially against members of the crime syndicate he runs.

He had been informed by his collaborators that the elections had taken place normally, but with the United Nations and the African Union challenging the drama that government officials and the ruling party (CPDM) had staged; Mr. Biya felt it was time to bring in his closest collaborators for an honest discussion.

He used the occasion to advise his collaborators to tone down their rhetoric, adding that though Cameroon was a sovereign country, the impressions and opinions of the international community still mattered.

Meanwhile, the fighting in the two English-speaking regions has continued with government forces going on a home-burning spree in many parts of the Northwest region.

On Thursday, February 13, 2020, soldiers loyal to Mr. Biya burnt a lady to death in Ntigi, a neighborhood in Bambili in the Northwest region, leaving many innocent civilians worried about their lives and future.

The burning of homes in the Northwest region is a daily affair. In a bid to render Southern Cameroonians desperate, the Yaounde government has been burning their homes and farms.  The government seems to be engaged in a scorch earth policy as a means of turning the population against Southern Cameroonian fighters who have given government forces a run for their money over the last three years.

In the Southwest region, many cities seem to be enjoying some peace, although from time to time, there are outbursts of tension in cities like Buea, Mamfe, Mutengene and Kumba. The situation in the region is very uncertain and can only be compared to Mount Etna whose eruptions have become normal.

Though this unsettling calm is prevailing in major cities in the Southwest region, the small towns are still taking a beating from the reckless military. In Ossing, a town some 6 miles from Mamfe, sex-starved and alcohol-inflamed soldiers killed two innocent civilians on Wednesday.

The trigger-happy soldiers are used to heading to small towns to conduct unnecessary raids as a means to enrich themselves and they do sometimes meet some resistance. Their modus operandi is known. They fire in the air to scare off any Southern Cameroonian fighters who might be around during the time of their ill-intentioned raids.

Many civilians have been victims of these irresponsible actions and the Yaounde government that seems to have given the military a carte blanche has never investigated any reckless killing of civilians.

Since the beginning of the crisis, over 5,000 civilians have been killed while sources in the country’s defense ministry put military deaths at slightly over 2,500 soldiers, excluding police officers and prison guards.

The country’s economy has also been hurt by the conflict that might not be addressed anytime soon due to the government’s arrogance and intransigence. Many state-owned corporations such as the CDC and PAMOL have gone under while SONARA, the country’s lone refinery located in Southern Cameroon, is tittering on the brink of collapse following a massive fire a few months ago.

For more than 40 years, the Yaounde government has been running these state-owned corporations located in Southern Cameroons as its Automatic Teller Machines (ATMs) and the collapse of those corporations has left the government with a bloodshot eye.

Cameroon is heading to the bottom of the abyss and only a well-crafted government policy can stop this spectacular collapse that has been orchestrated by Mr. Biya and his government.

The future is bleak. Things are falling apart. The Yaounde government is desperate. It has been sending delegations to development finance institutions such as the World Bank and the African Development Bank for financial assistance, but the outcome of those discussions has been anything but favorable.

Global investors do not trust the regime that has proven that it is not good at managing resources. Private investors prefer to head somewhere else. The Yaounde government has even been defaulting on its sovereign debts on many occasions and this does not speak well of it.

All these issues were given some attention during the emergency meeting wherein the president painted a very bleak image of things. He might have declared on February 10, 2020, that his government had created 500,000 jobs, but he knew that he was simply inventing things.

The country’s unemployment rate is in double digits and this is a huge concern to the government. With the Francophone majority already jumping into the fray, it is clear that the government is losing sleep.

Francophones who had been intimidated into silence are today speaking out, especially about the killings in the Northwest and Southwest regions, as well as the hardship that is triggering premature aging and death in the country.

The government is aware that if it does not act fast to allay fears and alleviate the poverty that is spreading very fast like wildfire, a popular uprising might show up and this will send the country into a downward political spiral.

The world is watching in total disbelief as Mr. Biya and his inefficient government drag a once-upon-a-time wealthy country to the bottom of a dark abyss. Cameroon is spiraling out of control and if something is not done; its chaos might cross its borders.

All the world is hoping for is the prevalence of wisdom, especially as the president celebrates his 87th birthday. Some analysts hold that somewhere, he might have an attack of conscience and will start taking the right decisions that might save a country that is on life support.