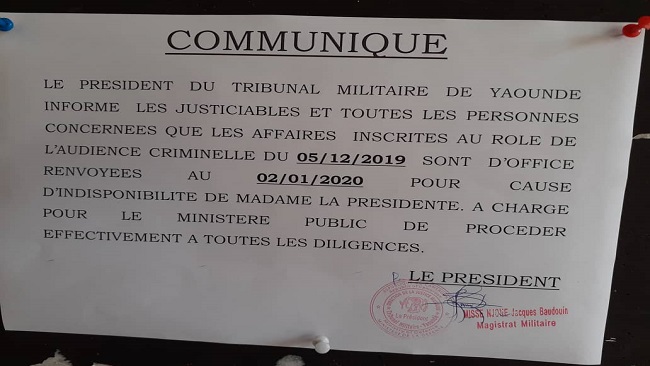 A French Cameroun government case against 37 innocent Southern Cameroons civilians abducted in Taraba State in Nigeria which raised fears of President Buhari’s interference in the Ambazonia crisis has been adjourned to the 2nd of January 2020.

The 37 Southern Cameroons asylum seekers in the Federal Republic of Nigeria were abducted on the 31st of December 2017 and illegally deported to French Cameroun and are facing charges of terrorism acts of terrorism, secession, and lack of National Identification Cards.

Cameroon Concord News understands that they were illegally deported to French Cameroun on the 26th of January 2018 and spent a year incommunicado in the bunkers of the National Gendarmerie Headquarters (SED) in Yaoundé without access to sunlight, no medical attention and are undergoing torture.

The 37 were later transferred to the Kondengui Central Prison on the 04th January 2019 where they have spent another year marking two years of unlawful detention without trial. They were meant to appear before the Military Court in Yaoundé for the 3rd time today.

The European Union and the United States government have voiced concerns on the deteriorating human rights situation in French Cameroun vis a vis the Southern Cameroons crisis. The next hearing is due to take place on Jan. 2nd.