Over the course of the past year, Cameroon has been experiencing internal turmoil and instability related to grievances pitting an Anglophone minority against a majority Francophone establishment. The Anglophone grievances, initially driven primarily by professionals – lawyers, school teachers, bureaucrats – have increasingly taken hold in a population that’s experienced a three-month Internet shut-down, several general strikes, school boycotts, escalating violence and the imprisonment of journalists and activists over the last 12 months.

During national holiday celebrations this past weekend, protesters were shot dead on the streets of several towns in Anglophone regions by Cameroonian security forces, and excessive violence has been widely reported. Amnesty International estimates that at least 17 protesters were killed. (Death toll now stands at a hundred) Cameroon has been led by the same long-standing president for over 30 years, Paul Biya, who has called for calm and “peaceful dialogue“, but hasn’t yet yielded an inch on the demand for reforms. Meanwhile, some Anglophone Cameroonians have a leader, a flag and a national anthem – and are demanding to secede from Cameroon, to form their own country of Ambazonia.

On October 1, Cameroonians celebrate Unification Day to mark not only the anniversary of when British Cameroon became independent from the British in 1961, but also their unification with French Cameroon to form a two-state federation, the Federal Republic of Cameroon. Over the years, the two-state solution gave way to a single state, the United Republic of Cameroon, in which the balance of power was centered around the Francophone majority. Over the years, the marginalization of Anglophone Cameroonians has become increasingly entrenched. Whether it be the lack of recognition for English education, services or applicable legal system, over the years the corrosive effects of this marginalization have been slowly eating away at the status quo. The central government operates only in French, and, in the last 35 years of Paul Biya’s rule, there has been no movement signaling interest in protecting, upholding – let alone promoting – minority interests in his country.

From Demands for Reform to Cries for Independence 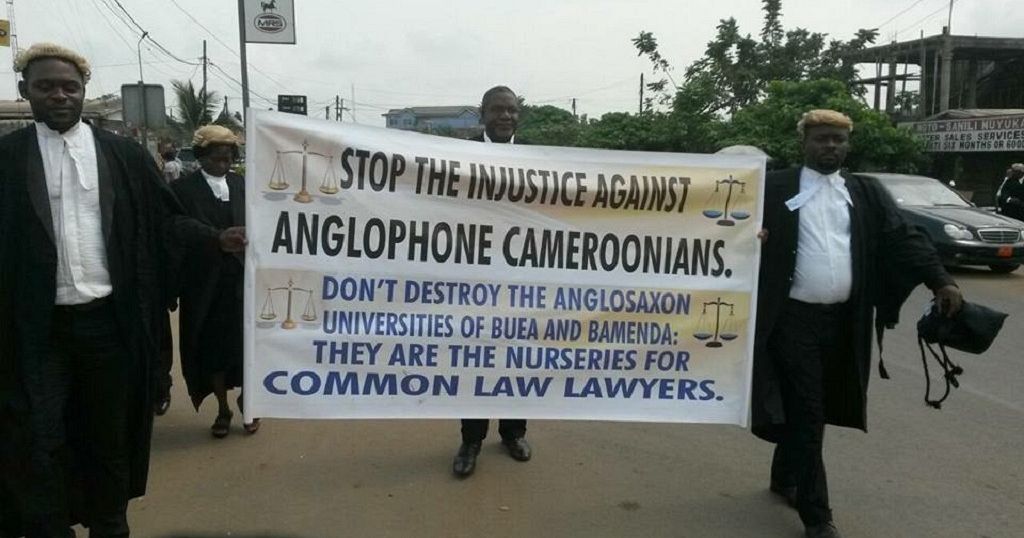 Lawyers protest in Cameroon – via Africanews

Last year, protesters started taking to the streets to demand greater autonomy and recognition of the English language in institutions, systems and services. The central government responded by cracking down on activists and shutting down the Internet. While gradual progress has been made, with new government initiatives to be more inclusive of Anglophones, the International Crisis Group notes that this progress is seen as “too little too late.” As the crisis continues to fester, a secessionist trend within the broader reform movement has been gaining strength. Their vocal demands have prompted an even stronger crack down – further arrests, military deployment in the region – from the central government, leading up to last weekend’s deadly violence. In this violent political climate, secessionists have been emboldened and gaining in popularity, though the exact extent of popular support for full independence from the rest of Cameroon, under the banner of Ambazonia, is difficult to gauge. A rally for Ambazonia even took place in front of the UN during the General Assembly in September, with similar events in Cameroon where tensions escalated between protesters and security forces.

Flag of Ambazonia – By Washiucho [Public domain], via Wikimedia Commons

While Anglophone Cameroon has legitimate grievances that need to be addressed by the government, a resolution that would include secession or independence for Ambazonia is highly unlikely. Few nations in modern history have accessed fully independent status as a nation, and this only after hard-fought battles that were dearly paid for. The international community long ago established – in law and in practice – that it is preferable for borders to remain stable (The African Union’s own constitution spells out the defense of members’ territorial integrity.) The youngest nation in the world, South Sudan, and its sister nation, Sudan, have never really stopped fighting since South Sudan became independent in 2011. The United Nations – or other regional organizations such as the AU or ECOWAS – are therefore likely to continue to encourage dialogue between the government and representatives from Anglophone Cameroon, without “siding” with secessionist demands.

So far, the international community and media have shown little interest in the situation in Cameroon, though one clear option available would be to begin brokering a dialogue. The table has yet to be even set for any discussions to occur, and the international community has an opportunity to make a difference by creating the conditions for negotiations to begin in earnest. With this approach, the central government can avoid the worst – a full blow rebellion – and Anglophone Cameroonians have an opportunity to have their grievances addressed. A political, negotiated solution is still within reach – for now.