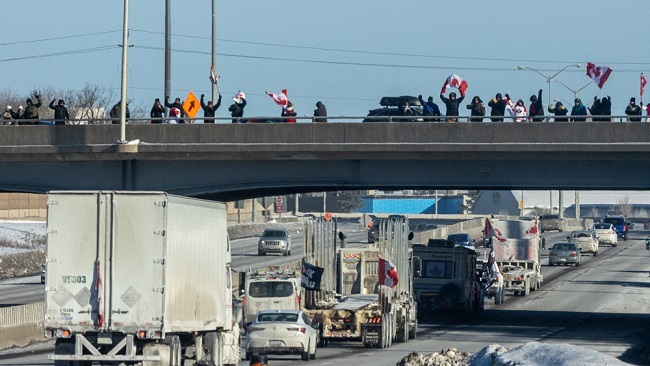 Canada’s Prime Minister Justin Trudeau has slammed protests that took place in the capital Ottawa to demand an end to COVID-19 vaccine mandates.

Supporters of the so-called “Freedom Convoy” rallied in Ottawa on Monday for the third consecutive day to protest against a vaccine requirement for cross-border truckers.

The protests have been largely peaceful but investigations have been opened into some incidents, including a video showing a woman dancing on the Tomb of the Unknown Soldier at the National War Memorial.

Some participants in the protest likened the COVID-19 restrictions to Jews under Nazi persecution, using Nazi symbols on protest signs.

The incidents drew condemnation from Trudeau, who refused to meet the protesters, describing them as “an insult to memory and truth”.

“Freedom of expression, assembly and association are cornerstones of democracy, but Nazi symbolism, racist imagery and desecration of war memorials are not.”

“This is not the story of our pandemic, our country, our people,” the premiere said, adding that his focus was on “standing with Canadians and getting through this pandemic.”

Candice Bergen, deputy leader of the Conservative Party, said the demonstrators represented millions who “have had enough of lockdowns and broken promises”.

“They deserve to be heard and they deserve respect,” she said in a tweet.

The supporters of the “Freedom Convoy” see the coronavirus health measures as government overreach of COVID-19 restrictions, demanding an end to all vaccine mandates nationwide.