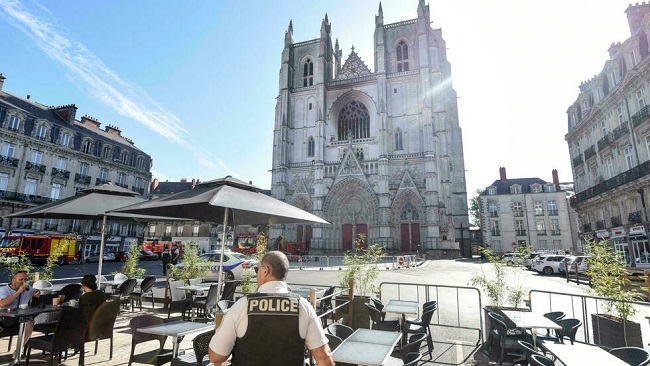 A Rwandan national suspected of causing a major fire that ravaged the cathedral in the French city of Nantes last year murdered a Catholic priest in western France on Monday, the interior minister and a source close to the investigation said.

“All my support for the Catholics of our country after the dramatic murder of a priest in the Vendée region,” French Interior Minister Gérald Darmanin wrote on Twitter, saying he was heading to the scene.

A source close to the investigation, who asked not to be named, told the AFP that the suspect had earlier gone to police in the town of Mortagne-sur-Sevre and declared he had killed a priest.

The slain priest, 60, had been welcoming the man into his church for several months, according to the source.

The man, a Rwandan national named as Emmanuel A., has confessed to being behind the fire at the Gothic Nantes cathedral that horrified France on July 18, 2020.

He had initially been placed under arrest before being freed under judicial control.

Earlier Monday, French far-right leader Marine Le Pen, who accuses the government of being weak on immigration, sought to capitalise on the incident, saying that in France “you can be an illegal migrant, set fire to a cathedral, not be expelled and then reoffend by murdering a priest”.

Darmanin immediately accused her of “making a polemic without knowing the facts” saying the man could not be expelled from France while he was under judicial control.

Immigration is set to be a major issue when Le Pen challenges centrist President Emmanuel Macron for the presidency next year.

Senator Bruno Retailleau, a conservative who represents the Vendée region, identified the victim as Olivier Maire. He said the local Catholic church had been housing the man.

“Deeply shocked by the terrible murder of a priest who had taken in his murderer into his care,” Retailleau said on Twitter.

“What was this man still doing in France?” asked the lawmaker, who is among several Les Républicains members likely to seek that party’s nomination for the 2022 presidential election.

The Nantes blaze came 15 months after the devastating 2019 fire at the Notre-Dame cathedral in Paris, which raised questions about the security risks for other historic churches across France.

While firefighters were able to contain the Nantes blaze after just two hours and save the main structure, its famed organ, which dated from 1621 and had survived the French revolution and World War II bombardment, was destroyed.

Also lost were priceless artefacts and paintings, including a work by the 19th-century artist Jean-Hippolyte Flandrin and stained glass windows that contained remnants of 16th-century glass. Repairs are due to take several years.