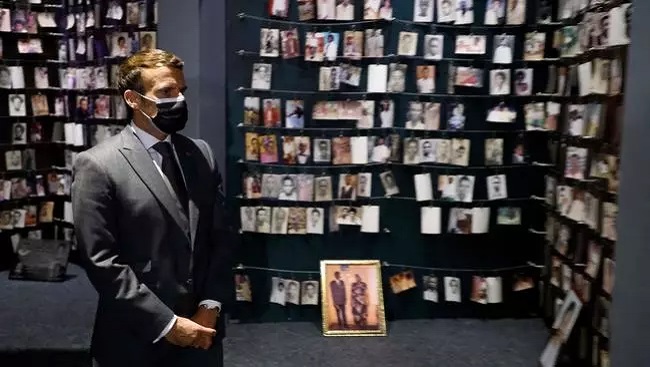 French President Emmanuel Macron arrived in Rwanda on Thursday for a highly symbolic visit aimed at turning the page on a quarter century of diplomatic tensions over France’s role in the country’s 1994 genocide.

Macron is the first French leader since 2010 to visit the central African country, which has long accused France of complicity in the mass killings of Rwandan Tutsis.

The French president arrived in the capital, Kigali, early Thursday and is set to hold talks with Rwandan President Paul Kagame.

He will visit a memorial to the 1994 slaughter that left an estimated 800,000 people dead, mainly minority Tutsis and moderate Hutus who tried to protect them from Hutu extremists.

Two reports completed in March and in April that examined France’s role in the genocide helped clear a path for Macron’s visit.

The French report, which was commissioned by Macron and released in March, included a adamning indictment of Paris’s role in the bloodshed.

In findings accepted by the French government, the historians accused Paris, which had close ties to the ethnic Hutu regime behind the massacres, of being “blind” to preparations for the genocide and said it bore “serious and overwhelming” responsibility.

The commission found no proof, however, of French complicity in the bloodshed.

For Kagame, who led the Tutsi rebellion that ended the genocide and had led the charge against France ever since, the report was a game-changer.

On a visit to France last week, Kagame, who at one point broke off relations with France, said the report had paved the way for France and Rwanda to have “a good relationship”.

Ahead of Macron’s visit to Kigali, both sides have spoken enthusiastically of a “normalisation” of ties.

“It signals, I think, a memory that is pacified and a relationship that is renewed,” he told reporters after a weekly cabinet meeting.

“It is proof that the president’s willingness to face our history, our past, in complete transparency is the best way forward,” he said.

French officials say Macron could also use the visit to name an ambassador to Rwanda, filling a post left vacant since 2015.

But some in Rwanda want France to go further in facing up to the past and officially apologise for failing to help stop the killing of 800,000 Rwandans between April and July 1994.

They will be listening closely when Macron delivers a speech on Thursday at the Kigali Genocide Memorial, the final resting place for over 250,000 genocide victims.

Kagame has downplayed the importance of the issue.

“It’s not up to me, or anyone else to demand apologies,” he told Le Monde newspaper in a recent interview, insisting that any such expression had to be spontaneous on the part of the French.

From Rwanda to Algeria and the colonial-era looting of African art, Macron has gone further than his predecessors in shining a light on unsavoury chapters of France’s past in Africa.

The last French president to visit Rwanda was Nicolas Sarkozy, who attempted to break the ice by admitting to “serious mistakes” and a “form of blindness” on the part of the French during the genocide.

His remarks fell short of expectations in Rwanda and relations between the countries continued to fester.

Macron has presented himself as the standard-bearer of a new generation that came of age after the colonial period and is not afraid to admit to past wrongs.

While campaigning for president, the (now) 43-year-old declared that the colonisation of Algeria was a “crime against humanity” — an admission that deeply upset conservatives in France, where colonial rule has long been portrayed as relatively benign.

He has also acknowledged that France instigated a system that facilitated torture during Algeria’s war of liberation from France, and he agreed to return art looted by colonial forces from Benin and Senegal.

Analysts say these gestures are aimed at wooing young Africans who view France with suspicion, convinced that it is still pulling the strings in former French colonies where it propped up strongmen for decades.

“The fact of being from a new generation and a young president does not change the course of relations between France and African countries,” Gilles Yabi, president of Senegal’s WATHI think-tank, told AFP after the release of the Rwanda report in March.

To counter allegations of French paternalism, Macron has made a point of trying to nurture ties with English-speaking countries in Africa that lie outside of France’s traditional sphere of influence.

After Rwanda, he will travel to South Africa.