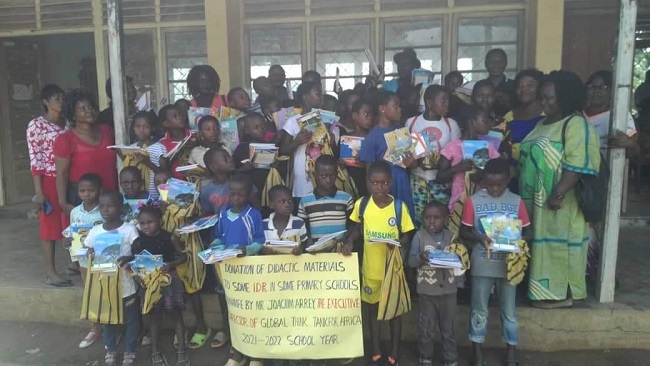 Primary school students from various schools in Mamfe town, where there is a huge concentration of students from surrounding villages, on Wednesday, November 17, 2021, received school supplies to enable them have access to much-needed education.

The students, who are part of the internally displaced people in Cameroon due to the conflict in the country’s two English-speaking regions which has resulted in thousands of deaths and refugees, were very happy to have the materials they need to make progress in life.

The Global Think Tank for Africa’s Executive Director, Dr. Joachim Arrey, had last week called on Cameroonians, especially those in the Diaspora, to help the rural child in the Northwest and Southwest Regions who has been out of school for many years.

In a recent interview with the Cameroon Concord News Group, Dr. Arrey underscored the importance of education, highlighting that no society ever develops when its people are not soundly educated.

He regretted that after five solid years, thousands of Southern Cameroonians children were still out of school. He urged the government and the various warring factions to narrow their differences so that the children could go back to school.

“The government like the fighters have to take a look at their strategies to ensure that those children do not get left in the darkness of ignorance because of a conflict they know nothing about. Our children’s education should be decoupled from the struggle to enable our children return to school. Keeping these children at home for a long time only robs them of their future and confidence. I am also urging people of good will to send as much material support as possible to those community schools which are seeking to impart some knowledge to our children. Those schools are not properly equipped to deal with many educational challenges. They need financial support to help the students. Any assistance in this regard will be appreciated,” he said.

The Global Think Tank’s executive director had promised emergency aid to schools in Mamfe town and the very first disbursement was made a day after. The Global Think Tank for Africa has already established partnerships with schools and educational authorities in Mamfe and the organization’s executive director has promised that more disbursements will be made in the days ahead and scholarships will be granted to needy students, especially girls whose conditions may not allow them to feel free to go to school.

“For my part, I am in touch with some educational authorities in Mamfe, and my organization, the Global Think Tank for Africa, will be offering books and other supplies worth CFAF 500,000 over the next three months to students in various schools in Mamfe town. My organization will also be granting scholarships to young girls in Manyu Division to enable them get an education. The modalities for the scholarships will be released in the days ahead. We need to do things differently if the future has to be bright for many of our children. It is education that opened many huge doors for me and I want other children to enjoy the fruits of a sound education,” he said.

Speaking during the event, educational authorities in Mamfe urged the students to take their studies seriously. They thanked the Global Think Tank for Africa for thinking of the vulnerable in society, adding that while the past could not be undone, the future could be redesigned through gestures like the one made by the Global Think Tank for Africa’s executive director.

Educational authorities in Mamfe called on other people of good will to emulate the example of the Global Think Tank for Africa, adding that when a child is educated, it is the entire nation that gets educated.

By Peter Agbor Nkongho in Mamfe