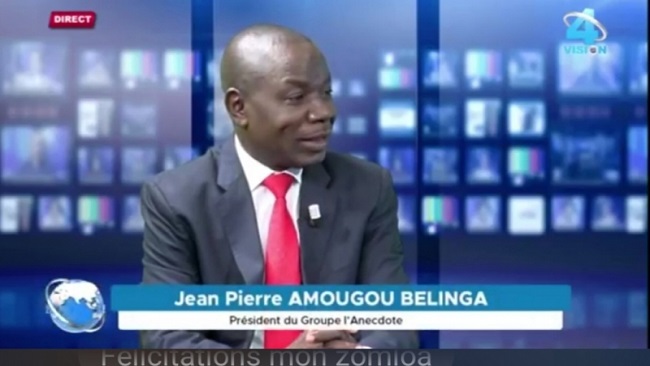 A Pro Biya prosecutor has issued a travel ban against the CEO of the L’Anecdote Group, Jean-Pierre Amougou Belinga, who is among the top officials of the ruling CPDM party widely blamed for the unprecedented corruption in Cameroon.

The Judge issued the travel ban against Amougou Belinga, who has been at the center of investigations at home and abroad into his conduct launched after it was revealed the controversial Francophone business tycoon had several nasty deals with prominent Cameroon government ministers.

Cameroon Intelligence Report understands the judge imposed the ban as part of a Cameroon government investigation into the Amougou Belinga business empire, whose existence has come under public scrutiny. CIR’s chief intelligence correspondent in Yaoundé hinted that the next stage of the Amogou Belinga probe would be questions to the CEO at the Special Criminal Court.

A judicial source said the travel ban was pursuant to an end of year declaration by the 88-year old President Biya over alleged financial misconduct deep within government circles.

The source said the Amougou Belinga probe will include investigating alleged fraud and complaints about the CEO by journalists working for his private TV Channel in addition to looking at CAMPOST’s financial engineering operations involving Minister Paul Atanga Nji, Minister Issa Tchiroma and Minister Laurent Esso.  The source added that the Special Criminal Court had summoned Amougou Belinga for questioning over the case but the exact date of the session had yet to be publicly disclosed.

Amougou Belinga’s investments in France are also being investigated on suspicion of money laundering and illicit enrichment, among other allegations including dubious state subsidies.

When the big man arrived at the Yaoundé-Nsimalen airport to board an Air France flight to Paris, he was told by police officers carrying a ban on leaving the country that he could not enter the plane.  His travel documents, including a Central African Republic diplomatic passport, were taken away from him.

The Beti-Ewondo businessman reportedly protested and threatened to fight but he left the scene and return home after he was informed that Martin Mbarga Nguélé, the Delegate General for National Security was about to order his arrest.

Cameroon’s economy has been in a free-fall state since President Biya announced a massive anti corruption campaign more than a decade ago.