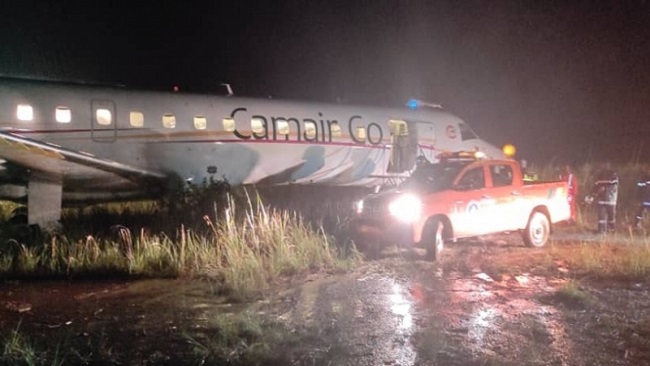 Yaounde-Nsimalen Airport: “Camair Co has been flying coffins for over a decade” 0

Even before the Friday incident at the Nsimalen International airport when a plane belonging to Cameroon’s national carrier, CAMAIR-CO ran off the runway, causing panic among passengers and flight crew, analysts had warned that CPDM corruption and poor leadership was making it difficult for the Biya regime to improve Cameroon’s air safety.

The exact circumstances of the incident are not yet known but first unofficial report hinted of no casualties.

Nsimalen airport officials say they have successfully evacuated all the passengers onboard the plane from the scene and only a scientific investigation will reveal the cause of the problem.

Despite CamairCo assurances to its customers, controversy still rages over the cause of the Nsimalen incident.

According to Cameroon Intelligence Report, which quoted an anonymous official in the Ministry of Transport, Camair Co has been flying coffins for over a decade.

The regime in Yaoundé has reportedly denied that the plane was faulty. But many in the Aviation industry contacted by Cameroon Concord News said that there were issues with the engine.

Some months ago, seven Cameroon government ministers had to make an emergency trip to the North of the country using a Kenya airways plane.

No one in the Ministry of Transport can provide any information on the various departments responsible for control of the systems, in terms of certification and control of CamairCo activities.

The general manager of CamairCo and his entire staff including the board of directors are all chartered members of the ruling CPDM Crime Syndicate. Correspondingly, the company avoids complying with government regulations by paying off officials.

If the CamairCo plane that ran off the runway on Friday was faulty, then it is evidently clear that the company paid an inspector to allow the aircraft to fly.

Air travel within Cameroon and all of Africa remains relatively dangerous. In 2010, The International Civil Aviation Organization reported that the accident rate for air traffic in Africa was more than four times the global average.