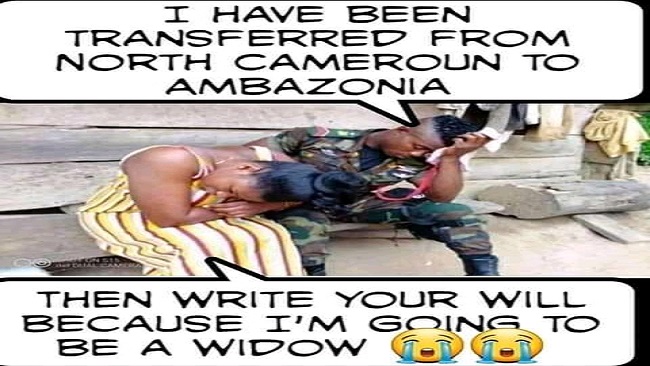 Yaoundé: The fear of Amba fighters is the beginning of justice 0

Nobody ever gave them a fighting chance when they started defending their territory with sticks and machetes.

The government saw them like clowns and the president easily dispatched soldiers to the two English-speaking regions of the country to crush them.

The country’s defense minister, Joseph Beti Assomo, arrogantly said the president’s orders would be enforced without pity. He was sure victory would be his in a few days. He simply did not know that there were huge surprises for him and his soldiers in Southern Cameroon and surprise could beat even the bravest.

In desperation, the boys who are today known as Amba Boys, scrambled for weapons. They took whatever they saw, but their best weapon was the hunting rifle which did deliver much. They had to fight. The enemy was determined and ferocious. He was not in Amba land for tourism. He was there to kill and kill he did.

They did not lose hope. They used the region’s jungle as a hideout, waiting for soldiers to make their mistakes, and mistakes they made which led to many knowing that the hunting rifle could be dangerous.

As time went on, the war’s story line started changing. Those who felt they had best weapons on earth and the monopoly of violence started moderating their narrative.

Those they had tagged as a handful of terrorists who wanted to destabilize the fatherland were really standing their ground and inflicting huge damage on the so-called professionally trained soldiers.

Instead of fighting the boys in the bushes, the professionally trained soldiers started killing whoever they met. Women, children and even the disabled were shot point blank by troops who wanted to demonstrate that they were on top of things. They had brought death and destruction to Southern Cameroons. Theirs was a war of attrition to discourage the population from supporting Amba fighters.

But they had underestimated the people’s determination. There is no military that can be greater than a people. Instead of winning hearts and minds, the Francophone dominated military made big and many enemies! Their winning and best strategy could not stand the test of time. This strategy like those which had preceded it would fall flat on its face as Amba fighters acquired more sophisticated weapons with the help of much-needed financial resources from the Southern Cameroonian Diaspora.

The once ragtag Amba fighters could now match the fire power of the Yaoundé military which was receiving massive support from the French and Chadians.

While civilian casualties have continued to race to the sky as the two elephants battle for the soul of the rich Southern Cameroons, the number of casualty on the military side has been big too, with more than two thousand soldiers killed and thousands maimed.

Most of those military men killed are from the center and south regions and each village in those regions is now aware of the dangers of war. Every parent who has a child in the military is now losing sleep. They don’t want to hear that their children have been deployed in any of the two English-speaking regions of the country.

Southern Cameroons has become a graveyard to the country’s military. Going to fight there is a one way ticket to an early grave. Amba fighters are determined.  The land is theirs and they are prepared to lay down their lives for their fatherland. They don’t forgive. Any soldier who crosses their path will never live to tell his ordeal.

The military and politicians are tired. The soldiers and politicians are completely demoralized and exhausted. Their best strategies have all failed.  The military death toll is a reminder that in a war, you cannot be sure that you will return home safely. The government had given the false impression that its soldiers would just sweep through Southern Cameroons, picking up all the boys they will meet in their path.

But the reality on the ground is always different. Academic theory is not always a reflection of reality.

Today, the game has changed. From hunting rifles and AK 47, Amba fighters have morphed into manufacturers of bombs and these bombs are a nightmare to the country’s military.

Their equipment is being wrecked, their soldiers killed and the military cannot pursue the fighters into the jungle. The tides have changed. Fear has moved to the side of the so-called brave and well trained soldiers.

The narrative is also changing. Federalism which was a crime when things started is now what all Yaoundé politicians are calling for.

Barrister Felix Nkongho Agbor-Balla and Dr. Fontem Neba were kidnapped under the cover of darkness by the government and taken to Yaoundé because they insisted that federalism would deliver better results to Cameroon.

They were charged with all the crimes and sins in the world for calling for federalism.  Time and money were wasted on something that clearly lacked a raison d’être. Today, these greedy politicians are pleading with Southern Cameroonians to come to the negotiating table to discuss the once “forbidden fruit”.

Unfortunately, they are seeking to shut the barn when the horses have bolted. Amba fighters are not going to listen to them. They are for the total liberation of their land. Decades of exploitation and marginalization have turned them off. They want to turn that page. They have read the page. It is full of pain and death. Federalism will not cut it.

Thousands have died for a free Southern Cameroons and not for a federal system. Leaders are supposed to listen and not to oppress their people. The time for federalism is over.

From every indication, the fear of Amba fighters is the beginning of justice. Without Amba fighters, the Yaoundé government would not have thought about justice. Amba fighters could be reckless sometimes, but their courage and bravery should be appreciated by all Southern Cameroonians. Thanks to them, the government’s narrative and rhetoric are changing. Pride goes before a fall.

Cameroon is crashing and there is more in the pipeline for an arrogant government. The arrogance of those who have ruled the country over the last 40 years has pushed the country into a deep dark abyss. It will take the international community to pull the country from the brink.